New Arduino Shield and Driver Board

The new batch of pcb's for VP-Fx have arrived. To give easy access to the Arduino Mega board i have designed a Shield that fits exactly on the Arduino, and has a load of screw connectors on it, and also headers to take a small flatcable from the shield to the additional Driver Board.

Here is a image of the shield, fully soldered: 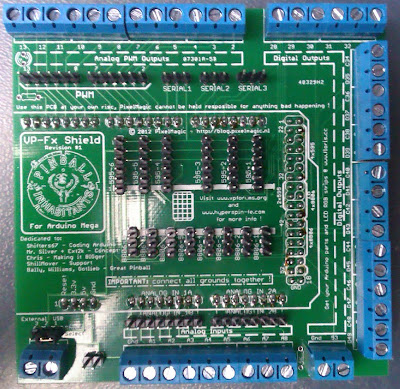 The vertical row of 6x6 pins is going to be used to transfer the signals from the Arduino to the Driver Board. This new driver board get all needed signals via the flatcable (data lines and power) and uses only 3 outputs on the Arduino and transfers that 3 signals to 32 outputs. All conversion is done by the VP-Fx software and you can assign port numbers the way you like. The board itself uses the same driver chips as the LED-Wiz does and gives you the same output power on 16 ports. The other 16 ports have the driver chips doubled and give you in theory double the power that 1 ledwiz output does.
All driver chips have been placed on feet, so then IF you happen to blow out a output you can easy remove the defective driver chip and replace it by a new one.

Here is a image of the fully polulated Driver Board: 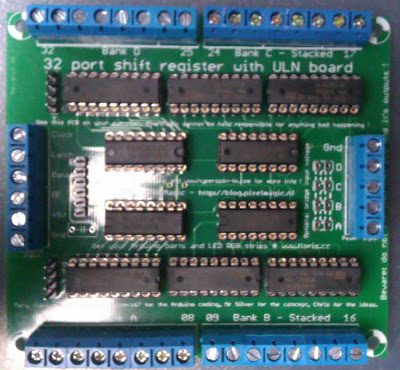 Both boards will be available shortly, only the pcb or fully soldered.

Here is the latest video I made with the VP-Fx software and some custom configuration. Notice the full-color LED's on the sides off the cab. There are 30 LED's on both sides off the cab, that can be driven individualy with VP-Fx. And remember, that 60 RGB LED's is not even close to the limit of the software. On LED-Wiz like config that 60 LED's would use 60*3=180 outputs !!

In the mean time, take a look at http://www.pieterfloris.nl/shop/ for some Arduino stuff you going to need.

Click here to use !
More info in this posting